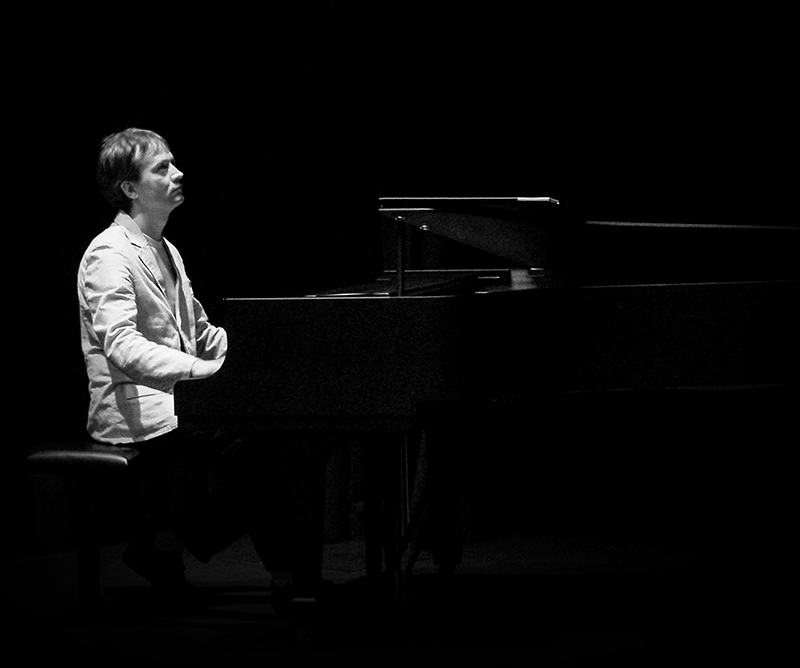 Stephen continued to travel extensively during 2018, playing at silent film screenings in Europe, America and Asia. The year was also marked by several rewarding collaborations with other silent film music specialists, including Elizabeth-Jane Baldry, Frank Bockius and Guenter Buchwald. He worked frequently with percussionist Martin Pyne and the Polish National Film Archive commissioned them to compose a new score for their restoration of Szalency (1928). His collaboration with Italian percussionist Luigi Vitale, for the Pordenone silent film festival screening of L’Atlantide, led to them to win the ‘David Gill Award’ for best musical collaboration. Stephen ended the year with being named in the Silent London end-of-year poll, winning the category ‘best screening with a single accompanist’ for the fifth year in a row.

“Stephen Horne is an artist who consistently raises the bar.”

“Stephen Horne on piano, accordion, and flute and Diana Rowan on harp provided a score that was as beautiful, natural, and perfect as the movie.”

ALGOL (PERFORMANCE AT THE BARBICAN CINEMA)

“His performance was a blur of sensitive tonality as he switched between themes as easily as instruments: modern silent cinema’s most elegantly-innovative one-man band!”

“It is very rare to hear a score for a silent film that you think of as definitive, but that really felt like the case… anything else will simply be redundant.”
Letter from Robin Baker (Head Curator, BFI National Archive).

“… we have Stephen Horne performing his lushly romantic score with the aid of a small band of musicians. Always deeply melodic… it’s good enough that I’d buy it as a piece of music in its own right, even without the pictures attached.”
(spank-the-monkey.typepad.com).

“Folks, to hear this man play the grand piano is like listening to angels sing! His score for the film was brilliant!”
Philip Castor (philsfilmadventures.blogspot).

“… the festival is anchored by exceptional musical accompaniment – a special bow to Stephen Horne, whose multi-instrumentalist talents were as inventive and tasteful as they were unerring in keeping pace with the material.”
Michael T. O’Toole (Film International).

“… multi-instrumentalist Stephen Horne used flute, accordion, percussion and a small strung instrument like a zither, as well as piano, to move this sophisticated and often cynical audience from laughter to tears in the space of a few bars.”
Sam Edwards (stuff.co.nz/waikato-times).

“Stephen Horne displayed dazzling virtuosity in his accompaniment for a variety of films… creating orchestral effects with the piano soundboard and accompanying himself on flute and accordion!”
Leonard Maltin (www.leonardmaltin.com).

“It’s extraordinary how you forget that the music isn’t issuing from the picture and hasn’t always belonged to the film – a testament to the exceptional sensitivity and invention of Horne’s original score.”
Thirza Wakefield (Sight and Sound blog).

“The exquisite new score is the finishing touch in the rebirth of The First Born.”
Pamela Hutchinson (Silent London).

“… Stephen Horne whose musical support of The First Born… was nothing short of exhilarating.”
Paul Joyce (ithankyouarthur.blogspot).

“A brand new score… provided a rich, unusual compliment to the film’s many moments of romance and suspense.”
Michael Mand (permanentplastichelmet.com).

A Cottage on Dartmoor (various performances)

“Stephen Horne provides the accompaniment to this film on piano. His playing was magnificent and the score he came up with meshed perfectly with the movie. He was truly inspired with the theatre scene too.”
John Sinnott (DVDTalk.com).

“This year’s [Pordenone Silent] festival boasted what was, to my ears and eyes, one of the most felicitous marriages between film and musician I have yet witnessed: Stephen Horne’s work with Anthony Asquith’s masterpiece, A Cottage on Dartmoor.”
Jay Weissberg (sensesofcinema.com).

“Stephen Horne… played with fervor and expertise, no sheet music in front of him, his eyes fixed to the screen. Horne’s composition… seemed made for the movie, twisting and turning with hope and dread across stark landscapes to an ending you might not expect.”
Allison Brophy Champion (Culpeper Star-Exponent).

“Stephen Horne managed something amazing by giving real poetry and subtlety to the whole film… the film was transformed by his playing.”
Christine Leteux.

“The film itself is powerful, but with Stephen Horne’s accompaniment it achieved the sublime.”
Rob Byrne.

“Talking of extraordinary things, Stephen Horne‘s music was a multi-instrumental tour de force.Some may have though that there was a… trio accompanying the film, but no, it was the one man.”
Luke McKernan (bioscopic.wordpress.com).

“His work as a composer/accompanist for silent film is so exhilarating that… I would urge you to purchase tickets to hear him accompany any film whatsoever… there was no mistaking the fact that the visuals Epstein placed upon the screen had been dwarfed by the sheer magnificence of Stephen Horne’s musical score.”
George Heymont (myculturallandscape.blogspot.com).

“Stephen Horne did an absolutely phenomenal job with the score… He started the film off playing the flute, and then added the piano in a little at a time. Yes, he was playing both the piano and a flute simultaneously, each with one hand… A bravura performance that was astonishing to experience.”
John Sinnott (DVDTalk.com).

“Pianist and Silent FIlm accompanist Stephen Horne just brought Kinugasa’s “Jujiro” (“Crossways”) to life with a stunning performance that brought out the film’s mesmerizing, experimental visual language and draining emotional content… There have been a lot of fine performances by orchestras, organists, quartets and pianists at the San Francisco Silent Film Festival this year, but this one (Horne’s third), I’ll never forget.”
Jeremy Mathews (thesamedame.com).